As long as I can remember, people have been on the lookout for items that were once in use in gas stations.  Gas pumps, signs, vending machines and even advertising from a certain brand (like Marathon or even Phillips 66) have been sought after.

I have even heard of people collecting items from the lesser known gas station companies as well, like ElReco.  I am going to be honest with you—I never heard of ElReco until I found this paperweight.

It turns out that Elreco stands for the Eldorado Refining Company. They operated out of El Dorado, Kansas until the company was sold to the K-T Oil Company (they maintained operations there after the sale).

When 1958 rolled around, that company was sold American Petrofina, and the stations were then renamed to the FINA brand. 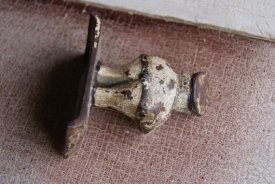 This paperweight was made in the early 1900’s, and it still has a good amount of the original paint on it.  The great thing about this paperweight is that it’s a perfect size so that it can be used anywhere from your desk to holding down a recipe in the kitchen.

You can see this terrific paperweight in my Etsy shop here.  Head on over and check it out!

This site uses Akismet to reduce spam. Learn how your comment data is processed.